November 06, 2017
You all saw the egg the Bills laid on Thursday night. Well it didn’t do the Southtowns Clowns any favors either. In fact, the two garbage time touchdowns nearly doubled their point total as it stood halfway through the fourth quarter.

I can’t even rag on the Gohawks because the Clowns were absolutely pathetic. The only dumb thing he did was leave Sebastian Janikowski in while the Raiders have him placed on IR. Even with quiet days from Jimmy Graham, DeSean Jackson, and Devonta Freeman, he still managed to bludgeon Southtowns. 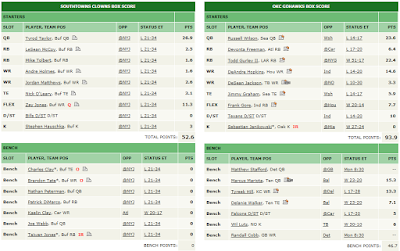 More turnovers than an Arby’s commercial.

More meaningless scoring than a game of solitaire.

The Jets D shut down the ground game like a January blizzard shuts down the Thruway in Buffalo.

The only receiver who did anything noteworthy wound up getting hurt in the first game he was actually impactful in.

The Bills face a daunting task when the 6-2 New Orleans pay a visit to New Era Field. Buffalo desperately needs a win to keep pace with New England and Jacksonville.

Southtowns, meanwhile, will have its first repeat opponent. Richers Ravens will take on the Clowns for the first time since Week Two. In that outing, the Ravens clobbered Southtowns, 104-39.4 and it probably should have been worse. Lucky for Noah Richer, now is his chance. Drew Brees and Mark Ingram will be doing double damage for both New Orleans and Richers. 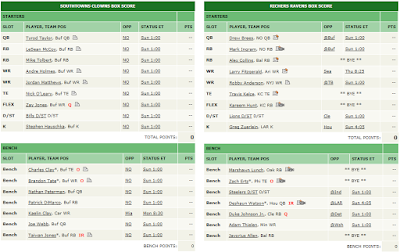 Southtowns keeps it competitive, and Buffalo stays unbeaten in Orchard Park. Richers Ravens take it, though, 95-70.