January 15, 2021
A video from 2007 featuring then-rookie running back Marshawn Lynch has recently been making the rounds on social media. The clip then exploded when ESPN tweeted it out on Wednesday, allowing many followers to enjoy its humour for the first time.
While the video itself is funny enough, there’s a heavy backstory to it that many who weren’t Bills fans at the time might not know.
- - -

After the 2006 season ended, McGahee sat down for an interview with Penthouse, in which he seemed to suggest the team should move to Canada.

The comments did not sit well with fans, who for nearly two decades had to deal with relocation rumours surrounding the team. They despised him for what he said; they burnt posters of him, wrote songs for their YouTube channels, sold “Willis is Trash” t-shirts, and even chipped in for billboards.

About two months after (and perhaps because of) the Penthouse chat, the Bills traded McGahee to the Baltimore Ravens. In one of his first interviews with the Baltimore Sun following his move, he continued to disparage the city, which at the time was still trying to find a way to recover from a decades-long economic downturn. 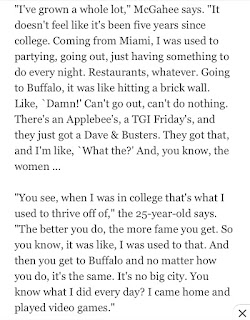 Naturally, fans of the team and citizens of Western New York took issue with his words.

A month later, the Bills selected Marshawn Lynch with their first pick in the 2007 draft. Lynch’s personality and family focus endeared him to fans immediately.

Additionally, when the NFL released its schedule for the upcoming season, it had the Bills hosting McGahee and the Ravens in Week 7. ESPN - who had just been in Buffalo two weeks prior - filmed the segment intending to run it on NFL Countdown the morning the Ravens were set to play in Buffalo.

Ultimately, the clip was a tongue-in-cheek reference to the offseason war-of-words between the two sides. It poked fun at McGahee and Buffalo while further establishing Marshawn as a fan favourite.