Some of you may look at our logo and wonder why it looks vaguely familiar. Many more may have no idea what it is or why we chose it. Here's its origin: 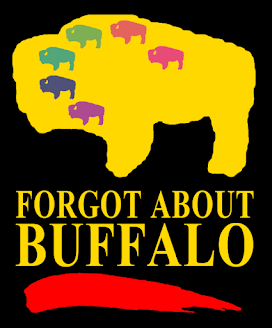 In January 2000, Roswell Park Cancer Institute announced they would be teaming up with the Burchfield-Penney Art Center to put on a fundraiser unique to Western New York. The two organizations received over 450 bids from local artists who intended to turn the plain, life-size statues of buffalo into distinctive works of art. The completed pieces of those chosen would then be placed all over the city for the duration of the summer, and in October of that year, would be auctioned off with the proceeds benefiting both parties.

The driving force behind the project’s formulation was Patty Capstraw Wilkins. Wilkins had been diagnosed with stage four colon cancer in 1998, and received treatment at Roswell Park. Inspired by Chicago’s Cows On Parade in 1999, Wilkins envisioned hordes of buffalo roaming around Western New York in a similar manner. She chaired the Herd About Buffalo steering committee, even doing so at times from a hospital bed. 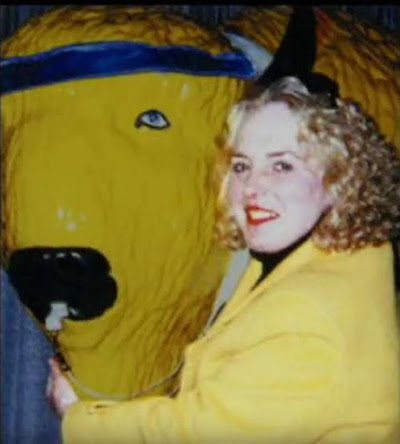 Each statue received sponsorship from a local business, organization, or individual, with a price tag of $2,750. Artists received a $750 stipend, but sponsors were also able to provide additional funds to enhance their projects.

The material for the statues, fiberglass, was selected because of its malleability and durability. Each buffalo would start with measurements of 7 feet from head to tail, stand 4 1/2 feet tall, and weigh over 100 pounds. Initially intending to have 50 of these statues, the exhibition grew to 100 at the time of its announcement, and eventually wound up with 154 total buffalo in the Herd, with designs ranging from conventional to wildly ornate.

The statues were made in Nebraska and packed onto flatbed trucks for a 1,000 mile journey from the heartland to the Queen City. Once they arrived, they were stored on the top floor of the Tri-Main Building before being distributed to their assigned artists.

The very first buffalo for public viewing made its appearance at Roswell Park's All Star Night, a black-tie fundraiser, on January 22, 2000, just two weeks after the initial announcement. The gala was held in the Adam’s Mark Hotel, and was designed by Paul Anthony.

The first buffalo to hit the streets did so in April 2000, much to the delight of locals and tourists alike. People swarmed to destinations like the waterfront, Saturn Club, Adelphia headquarters, and even the Buffalo Niagara International Airport to catch the newest installations. 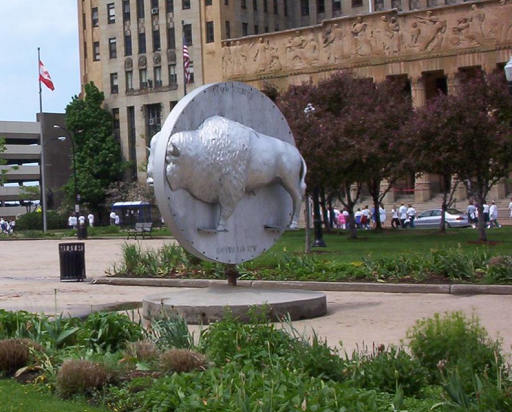 Not all buffalo survived the summer unscathed. For statues that fell prey to injury, there was the M*A*S*H (Medical Assistance for Suffering Herd) unit – seriously! “Dr.” Bill Wilson, who was an assigned artist for two buffalo and assisted on a third, was one of the helping hands that molded prosthetic horns and hooves to get the pieces back on display. City police were also diligent in punishing Herd vandals, and a handful of arrests were made during the summer when statues were intentionally tipped, broken, punched, or cracked.

New statues continued to debut through September, although Wilkins did not live long enough to see them all. Wilkins died, aged 55, after succumbing to her cancer. Her memory continued to live on throughout the remainder of the exhibition, while her husband, Chris, replaced her on the steering committee.

All the buffalo were rounded up and delivered to a sold-out Shea’s Performing Arts Center for the auction on October 24, 2000. Certain buffalo, like “FAN-demonium” and “Millefiori” were raffled off, while others were sold via auction. A lively crowd contributed generously to the fundraiser, with things culminating in a wild bidding war between restauranteur Russell J. Salvatore and an artist’s husband for the final, rose-covered statue, “Buffalo Blooms.” All told, the fundraising netted over $1 million for Roswell Park alone. 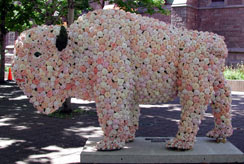 Following the fundraiser, the buffalo were shipped out and distributed all over the region, and even beyond state lines. Statues, for the most part, retained their original identities, like “Comic Buffalo,” which took up residence in the village of Hamburg, and only changed when its owners added festive garb to its wardrobe on Christmas and Cinco de Mayo. “Buffalo Soldier” found a home at the very apropos VA Medical Center. 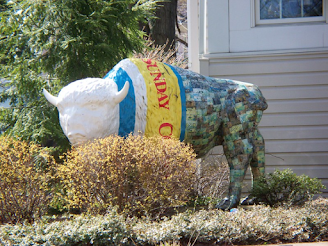 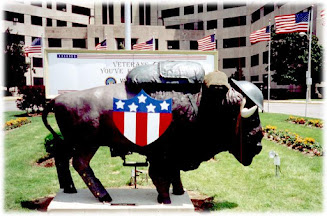 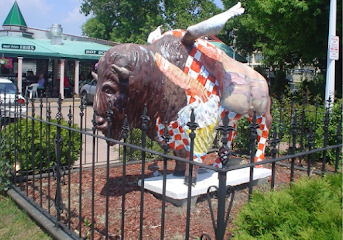 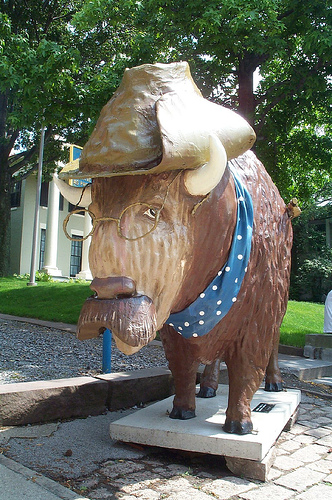 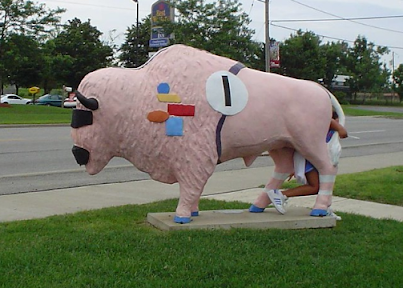 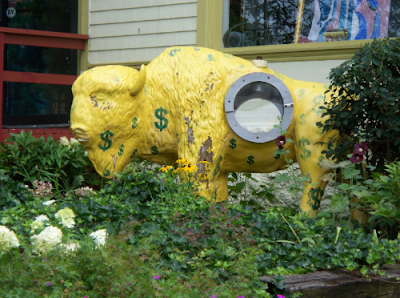 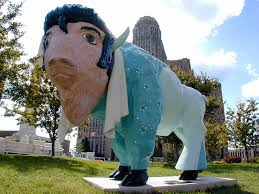 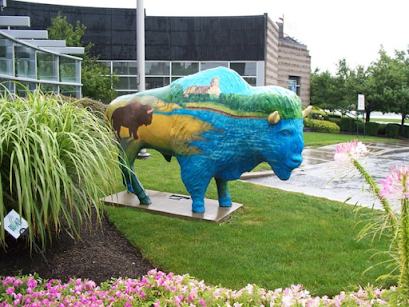 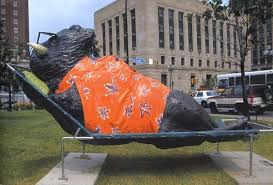 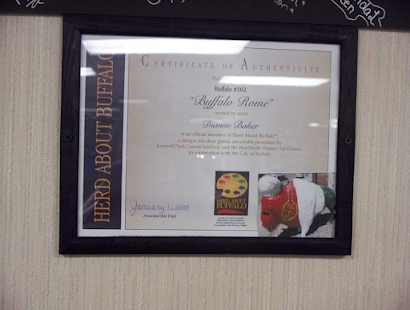 Buffalo expatriates were big buyers that expanded the Herd’s footprint outside of Western New York. “White Buffalo Nickel 2000 – Flipside” roamed south to Rex, Ga., after being purchased by Buffalo native Marlene Baggett, who made it a fixture at her chicken wing restaurant. Tonawanda expat Steven Chernoff bought a winged buffalo called “Buffalo, a City of Eagle Vision” to join him in Kansas.

A follow-up companion book for the exhibition was published in November 2000. In early 2001, miniature versions of 50 of the original Herd were created and put online for auction to raise additional funds for Roswell Park. There were also three newcomers to that crop, with two bypassing auction and being specially created and gifted to Wilkins’ widower, and another close friend, Sally Russell. In 2018, Roswell Park revisited the concept with “Herd of Hope,” a new campaign featuring life-size and miniaturized blue buffalo statues available to anyone with donations of $5,000 or $200, respectively. As of publication, the new generation of buffalo are still available at herdofhope.org. 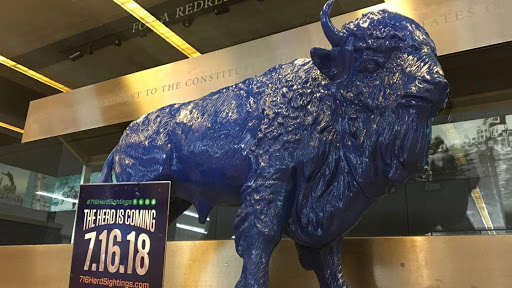 20 years on, many of the original buffalo are still out and about. “The Head & Tail Buffalo” is still located on the campus of Roswell Park. Even photos of the Herd are still proudly displayed, like those of “Dr. Jerry” at Peter Purcell’s dental office in West Seneca.

The concept of buffalo serving as mascots for the City of Buffalo was not novel at the time Herd About Buffalo was launched. However, it did inspire others to find their own animals to put their civic pride on display. A Wilson football-themed buffalo welcomed fans into the coincidentally-named Ralph Wilson Stadium until being auctioned off in 2017 for $1,050. Roamer welcomes out-of-towners as a permanent resident at Visit Buffalo Niagara. 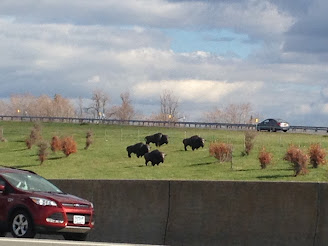 Perhaps there is no better example of that occurrence than the small herd that grazes at the I-90/I-190 interchange near the Buffalo-Cheektowaga line. Though their numbers have diminished due to time, circumstance, and theft, the family there was undoubtedly inspired by Wilkins’ vision at the turn of the millennium.
Buffalo burchfield-penney herd about buffalo roswell park