Who will become the next WCC racer?

November 08, 2017
Some major news out of Coca-Cola Field yesterday afternoon:


It's #ElectionDay. So, help us fill out this ballot! We're taking submissions for @BisonsCelery's replacement in 18! https://t.co/4s0zKW3YrU pic.twitter.com/8srGm50TZX
— Buffalo Bisons (@BuffaloBisons) November 7, 2017


That's right. It turns out the Bisons' Wing-Cheese-Celery (WCC) Race will remain a four-character club. After Celery's retirement this past August, the team will let the people decide who will take its place alongside Bleu Cheese, Atomic Wing, and Chicken Wing.

As passionate as people were about Celery, you've got to believe there will be some major divides as people play up their favorite replacement character. Several people have also astutely pointed out that a new character will force the race to find a new name, lest it become a misnomer.

So... who should get the promotion?

I've put together a list of the top 24 candidates, and ranked them from the least preferable to the most.

Bleu Cheese's wannabe cousin. Any self-respecting Buffalonian knows wings are to be paired with bleu cheese and bleu cheese only. Ranch dressing does not deserve to be in the same strata. 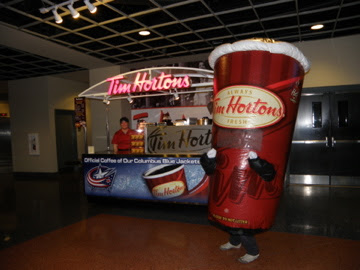 I know there's a Tim Hortons coffee cup mascot running around somewhere. Why not have it run a round Coca-Cola Field? Well, I'll tell you why not. Because the combination of chicken wings and coffee is absurd.

The types of sausages you can find at places like Scime's are truly top-notch. Unfortunately, no one really thinks of wings and sausage going together.

Uninspired and unoriginal. These only belong together on a funky sampler plate and maybe not even there.

This has been a new addition to the ballpark menu since the Blue Jays became the Bisons' parent club. I had my first-ever poutine experience there and it wasn't too bad. But again, these low picks are only low because they don't really belong with wings. Good try though. 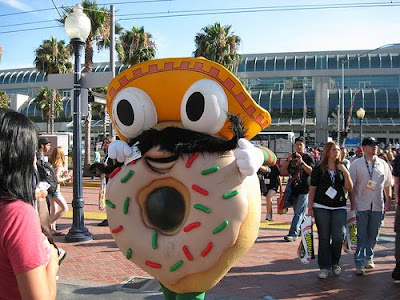 A big Timmy Ho's donut to follow up some wings sounds like a delicious dinner-dessert combination. Besides, if it's always following the wings, that donut shape will be a permanent score marker for him in no time.

The horseradish mustard everybody loves, now unleashed as a racing mascot!

Not unrelated, I have discovered several other stores, including Wegmans, have taken to making their own horseradish mustard. The only problem is they make it brown, not that thick, heavy yellow Weber's and every other table mustard is recognized for. 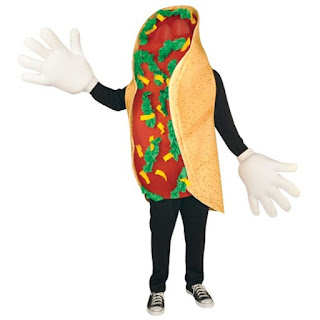 Mighty Taco could get in on the action. Or Lloyd. Or any other of the bazillion taco and burrito places that are popping up around Western New York. One thing is for certain: It would never be able to be Taco Bell.

If the mascot-to-be isn't singing "'cause if I were an Oscar Mayer wiener/Everyone would be in love with me," then they don't deserve this honor. Unfortunately, I've discovered that hot dogs are a truly regional food. Aside from Oscar Mayer, no other hot dog brand is a truly national power. In WNY, Sahlen's is king. And a char-broiled footlong from Ted's could make a pretty solid addition to the race.

Buffalo's signature sweet. Most people outside of Buffalo either don't know what it is, or have been tricked by Trader Joe's into thinking it's disgusting. Sponge candy should NEVER look like this: 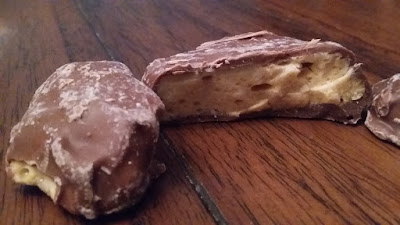 PS - What are this dude and his "sea foam candy" about? Get out of here, guy.

A majorly forgotten-about piece of the wing-eating experience. If you aren't swimming in a sea of wrappers and crusty, dried-out wetnaps after a visit to Duff's, you didn't go hard enough. Sad thing about this though is that they're only used once the wings are gone. If that translated to the race, Wing, Atomic, and Bleu would always come in first, and Moist Towelette would be the new Celery.

Does Chicken Finger deserve to race against its cousins for family supremacy? Probably. And if you're wondering why boneless wings don't appear on this list while chicken fingers do, it's because boneless wings are the chicken finger equivalents of not being able to draw inside the lines.

All I'm envisioning is a giant set of wind-up teeth chattering away while Bleu, Atomic, and Wing no longer run to win a race, but run to ensure their literal survival.

Super Bowls, graduation parties, half-days in middle school. None of those events are complete without some Troyer Farms chips and that oh-so-tasty Bison dip. Plus, it's built-in marketing gold for both the Bisons and Bison.

Just like wings, hamburgers originated in Western New York. At the 1885 Erie County Fair, some vendors opted to squish ground beef into the patties after they ran out of sausage meat. None of those other hustlers on Wikipedia can lay claim to it, primarily because we all know the food got its name from the town the fair was (and still is) held in - Hamburg.

An unheralded side for a powerhouse entrée, a good french fry can be an amazing partner for wings. They can be used to sop up the extra wing sauces, or can be enjoyed on their own. Only question is whether the mascot would be a whole container of fries or just a very tall and lanky singular one? Or... would it be curly?

This isn't just a food suggestion. This is a full-fledged mascot suggestion. This is a way to ensure the good name of Conehead never has to leave the ballpark, even after hero Tom Girot calls it a career. Ice cream is a huge ballpark favorite, especially on hot summer Markdown Mondays. Perry's ice cream is synonymous with Buffalo. Why not use them to immortalize Conehead in another way fans will love for years to come? 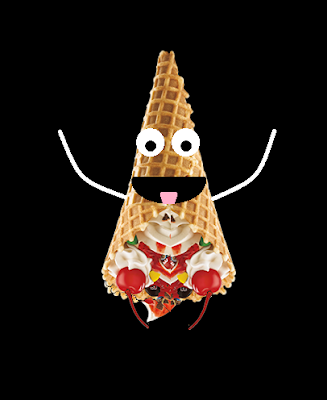 David Allan Coe said it best when he sang "You Can Count on Beer." That will certainly never be truer than out on the field. Cheer for Beer shirts have existed in many forms for decades. Now it's time for the Bisons to get in on the game. 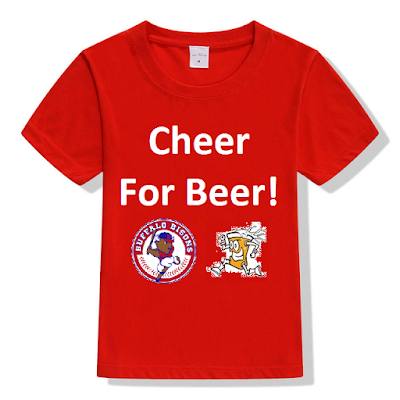 Although pretty much anyone not from Buffalo thinks these are atrocious, a goofy-looking roast beef sandwich modeled after Mayor McCheese would be a welcome addition to the club. And if it tussles with anybody else, they'd be "beefing" and there's another long-term storyline that could eventually be marketed.

What? You thought this was a race for food? Well I'm changing the game. This is a race about ballpark CLASSICS, and Eric Simoncelli is a true classic in every sense of the word. He's been a part of the team since All-Star Week in 2012, and when he's not in the dugout, he's posted up in the very bullpen the racers run past nearly every night of the year. If we can't add him into the race, at least give him his own baseball card in the team set next season. 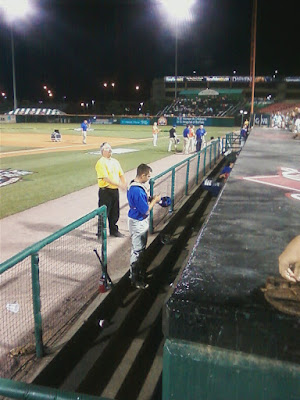 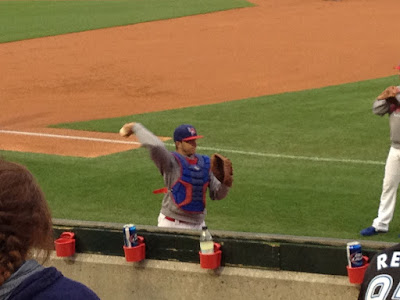 .@BuffaloBisons The one name that might stump most people was my first answer #ThatsMahBoi @Simonsays021 pic.twitter.com/4w8mCLBjHC
— Matt Birt (@BirtMC) February 19, 2015

SQUAD! The top @NHL prospects and some of your #Bisons! pic.twitter.com/4eUreKyNTR
— Buffalo Bisons (@BuffaloBisons) June 22, 2016

Everyone's favorite troublemaker. Carrot has been a witness to - and the cause of - several noteworthy moments in WCC Race history. He was on hand during the infamous "Shove" in 2013:

He got his comeuppance for being a Bon Jovi supporter in 2014:

And in 2016, he delivered the hardest hit at Coca-Cola Field since Valentino Pascucci during the Home Run Derby:

Carrot has no alliances. It's also the most realistic food option that would ensure the race name stays unchanged (coffee, sponge candy, or chicken finger being the others) Maybe it's time to bring it in full-time.

BBQ isn't my first choice when it comes to wings, but maybe that's the perfect metaphor now that it'd be joining as an afterthought. Atomic joined the fray after the first season of racing, and wasn't made into a full-time participant right away. But BBQ has its place, and now seems like the perfect time to add it to the mix.

Loganberry originated at Crystal Beach Amusement Park over a century ago. Now it's one of Buffalo's favorite refreshments. Coca-Cola is responsible for the bottling and distribution of Crystal Beach loganberry in the region. And the Bisons play at Coca-Cola Field. This combination is almost perfect.

Pizza and wings. There is no better argument for anything else. Wings pair with pizza, bleu cheese can be used on both. This combination is actually perfect. 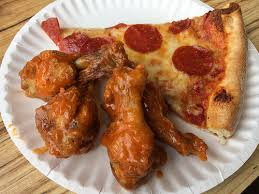 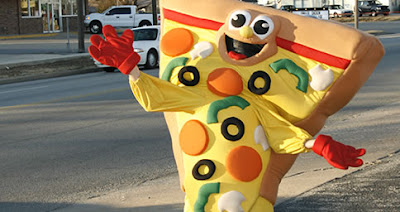