The Southtowns Clowns lost by 110 points this week

--- Consider him a MasterCard bill, because the credit is due ---

Have you ever seen such a thorough evisceration outside of a slaughterhouse? On the field, the Bufflao Bills played with more apathy than high school seniors the Friday before graduation. That lack of effort carried over to the Southtowns Clowns, who may have suffered the worst loss in the history of fantasy football.

It certainly didn’t help that both the Bills and Clowns had to face Drew Brees and Mark Ingram. But who would’ve figured the Saints would’ve gone to a ground-and-pound gameplan to dispose of Buffalo like a bag full of dog poop?

Ingram’s 131 yards and three touchdowns were more than enough to beat the Bills on his own. Overall, New Orleans outgained Buffalo 482 yards to 198, had triple the amount of first downs (32 to 10) and only allowed a garbage-time touchdown to the backups after Sean McDermott finally pulled his starters. 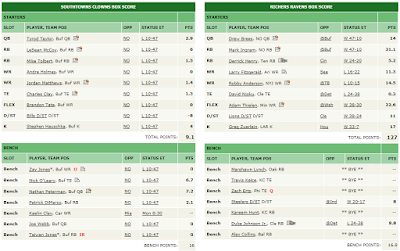 The only bright spot (if you can even call it that) is that the Bills rushed for 69 yards on the ground. 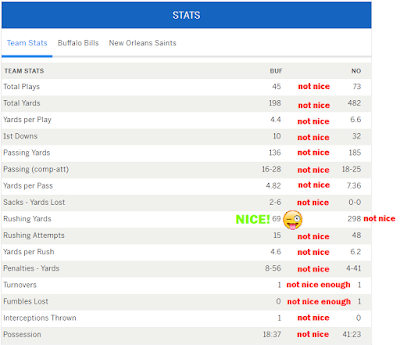 Not that it would’ve made any difference, but the jackwagon that owns Team 10 refuses to deal Kelvin Benjamin to me. I can only offer up Kaelin Clay, who now plays for Carolina. But he’s got Benjamin on his bench and could’ve given me 4.2 wholly worthless points yesterday. 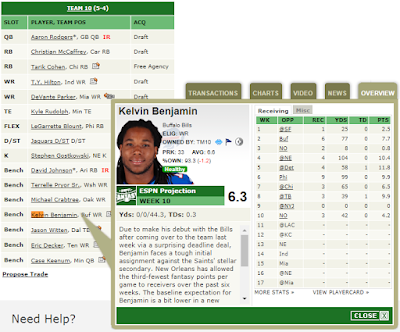 A petition to have Team 10 trade Benjamin to the Clowns is currently being discussed in the lower chamber of Congress.

I honestly don’t want to slog through the rest of this season. After a promising 2-1 start, the Clowns have fallen off a cliff. I’m also realizing once more my burning hatred for fantasy sports – even when the team is completely made up of my favorite team. But I have an obligation to continue to do right by this site and see it out.

Next week, the 5-4 Bills will face the Los Angeles Chargers for the first time since 1960.

The Chargers stand at 3-6, can barely wrangle up more fans than the Home Depot website, and are the best chance to keep the Bills above .500 before the god-awful divisional onslaught that will be the month of December.

The 2-8 Southtowns Clowns, meanwhile, will take on Erich Campolungo's ALB Men of Mayhem, whose record is 5-5. Last time these two met, the Clowns emerged victorious with a narrow five-point win. It remains the last team Southtowns has beaten. 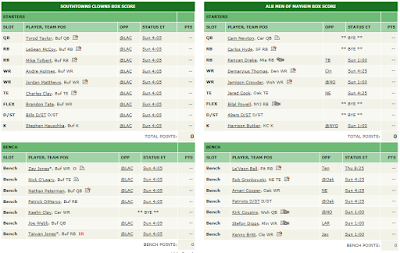 You have to think the team will get back on track this weekend. You just have to Billieve it. Clowns take this one, 85-83.7.