Do you Billieve in tragic?

The Southtowns Clowns essentially lost to a flag football team yesterday. The ALB Men of Mayhem had FOUR starters out on bye weeks, yet still managed to easily handle their business. It was never particularly close, and halfway through the second it was already a real possibility a full roster of Bills could still mess this one up.

Without a QB, one RB, a flex player or a defense, the Men of Mayhem still managed to win by virtue of a 12.4 point day from Demaryius Thomas and some other help along the way. Even losing all 7.6 of Jamison Crowder’s points wouldn’t be enough to give Mayhem the L. 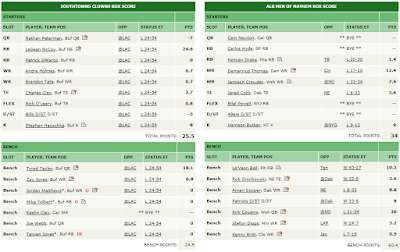 Sean McDermott and the Bills took plenty of heat for benching Tyrod Taylor because the defense couldn’t hold itself. That heat turned into Mount Vesuvius by the time replacement QB Nathan Peterman threw his fifth interception of the game. He didn’t return after halftime, where the Bills were trailing 37-7. I’m not exactly sure, but that has got to be one of the top five worst debuts in league history.

After he returned, Tyrod did Tyrod things, throwing and running for touchdowns late to ensure the Bills didn’t lose by 50.

Once Peterman showed signs of ineptitude, LeSean McCoy was the only offensive player capable of turning it around. Shady’s 24.6 fantasy points are the only reason the Clowns didn’t end the game in single digits.

Kelvin Benjamin suffered a severe injury early in the game, after a 20-yard catch (his only contribution on the day). Unfortunately, the jerk who runs Team 10 still hasn't traded him despite the fact Benjamin sits deep on his bench. And next week, the Clowns and Team 10 just happened to be going head-to-head. 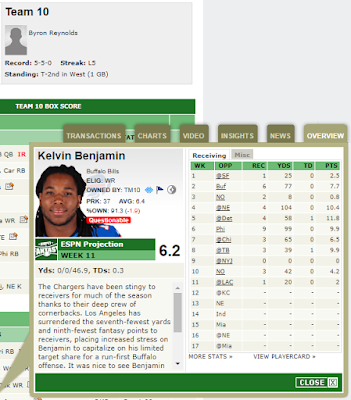 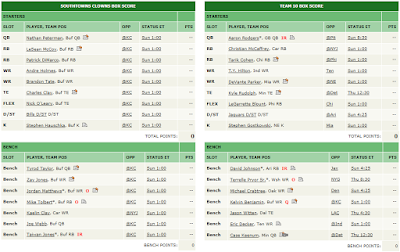 I already hated fantasy football before I did this. I’ve been trying to keep it together the last few weeks, but yesterday’s game was the final straw.

As you can tell from the above section, there will be no next time for these Southtowns Clowns articles. The team will still be managed and play through the end of the season, at which time we will return with a season recap. But the weekly rewinds will no longer be written and shared.

In that spirit, I’d like to leave you all with a little tune that captures the essence of this Bills team. It can be sung to the tune of "Do You Believe in Magic" by The Lovin' Spoonful.

Do you Billieve in tragic in Orchard Park
How the team disappoints from dawn until dark
And it's tragic if the football is poopy
It makes you long for the days of old Doug Flutie
I'd tell you about the magic, but it'll bruise your soul
‘cause it feels like it happened a hundred years ago

If you Billieve it’s tragic, don't bother to watch
Just stay out and tailgate until you’re stopped by the cops
Don’t go, please listen, it won’t end with a smile
Just like Michael Clarke Duncan’s character in The Green Mile
The players start losing, and they can't seem to find
Any way to fix it, it just blows your mind

Since Billieving is tragic, come along with me
I’m going to Home Depot and it’s not even 3
I can’t stand it, this team is the worst
Their season might as well have shown up in a hearse
Just look at Wikipedia, baby, then you'll see
Just how tragic is to follow this team week after week

Yeah
Do you Billieve it’s tragic?
Yeah
Billieve it’s so tragic on a young fan's soul
Billieve that it started hurting so long ago
Billieve in the magic that there used to be
Ohh, but now we’re talkin’ ‘bout the tragic

There’s no way the Clowns get another victory this season. They’re maxed out at two wins.