October 08, 2017
Three years ago today, the Buffalo Bills were sold to Terry and Kim Pegula. To commemorate the third anniversary of the sale, please enjoy this piece I wrote on October 14, 2014 to express my feelings about it.

My entire life, I have been told many things; there is such a thing as too much chocolate in your chocolate milk, you can’t wear gym shorts when it’s cold outside, and that the Buffalo Bills would skip town before I died. Unlike the first two points, I actually believed the third one. Using half a container of Nesquik in one sitting was the norm, and comfort always trumped cold, but it was almost a foregone conclusion in my mind and in just about everyone else’s that the Bills would leave to go to a more popular market like Los Angeles. When Ralph Wilson passed away in March, those fears were amplified. The uncertainty of not knowing how much longer they’d be around was a constant point of worry. Then, after months of Bon Jovi bans and Donald Trump rhetoric, the patron saint of Buffalo saved us all.

Before Tom Golisano put the Sabres up for sale, I had never heard of Terry Pegula. The idea of some oil tycoon who had seemingly no relevant sports experience buying the Sabres made me skeptical, but as the process continued, and people like Jim Balsillie tried to uproot the team, the idea of a humble, passionate hockey fan making his lifelong dream come true really began to appeal to me. After all, I’d always said if I ever won the lottery, I would try to buy the Buffalo Bills. So when the Pegula family finally became the owners of the Sabres, the thrill of being a fan was never as great as in those days and weeks. Terry had been able to give us more than anyone else had in my 17 years of sports fandom: peace of mind. The assurance that I could root for the Sabres without fear of them moving to Hamilton or Seattle was bliss.

Compare that to the nagging perpetual dread and uncertainty that loomed over the Bills. The recent agreement with Rogers Communications to play games in Toronto was okay with me because we were getting more money from the deal than we would if we played our entire home slate at the Ralph. Of course, many people felt the agreement was the first step towards relocation. I didn’t oppose it because as long as Ralph was around, that wouldn’t happen. All that changed on December 16, 2012, when I went to the Bills-Seahawks game at the Rogers Centre.

The game itself was a disaster, with Russell Wilson and ex-Bill Marshawn Lynch pummeling Buffalo by a 50-17 margin. The majority of the crowd on hand didn’t seem to mind much, however, because it was primarily made up of Seahawks fans or Toronto locals who were rooting against the ‘home team.’ After the game mercilessly ended and I headed back down the QEW, I made a promise to myself that I would never support the Toronto Series. No more merchandise, no more tickets, not even a positive mention about the game I had attended (there were none to mention anyway). There was no way I would be quiet while it looked like the Bills could be shipped off in U-Hauls.

In what may seem like an overreaction to circumstances beyond my control, after Ralph Wilson’s death I started an online petition to keep the Bills in Western New York. I coupled it with a Twitter account I called Save Buffalo’s Bills (@BuffalosBills) that I used to angrily tweet at Jon Bon Jovi and Roger Goodell, retweet any relevant updates on the sale process, and even messages of welcome to Mark Cohon and the CFL should the Bills relocate. It was all I could do from Athens, sitting on the sidelines while the Buffalo Fan Alliance and others drew more support for their causes on the homefront.

I also removed all the Bon Jovi songs from my iPhone while the team was in limbo. Not like it was a very impactful move, but it made me feel good, like I could contribute in some way.

As the spring became summer, and frontrunners for the Bills began to emerge, it seemed like it would come down to either Bon Jovi and the MLSE group or Donald Trump. Pegula’s name had been mentioned, but it didn’t seem credible at first. Other names swirled around too, like Golisano, who could provide the same divine intervention he did when the Sabres went bankrupt after the Rigas family went to prison, but Bon Jovi and Trump seemed to be the major players in the bidding.

When it was announced that Pegula sold over $1 billion in land rights to AEP, that was when the speculation intensified. Despite the waves the move made, he remained quiet about his intentions, and that made it hard for me to believe he really wanted to buy the team. Personally, I felt like he believed he was obligated to save the Bills because he was a prominent figure in the community, and that he wasn’t as passionate about it as he was when he took control of the Sabres. Additionally, I still believed that the Toronto group was the biggest threat to the long-term future of the team.

Imagine for a minute the Bills were sold to a party that intended to move the team. Initially, anger and outrage would be the themes of the day. The new owners wouldn’t be able to make a public appearance in Buffalo without fearing for their personal safety. It would be reminiscent of Cleveland in 1996, when Art Modell uprooted the Browns and took them to Baltimore. In their last home game before moving, fans lit fires in the stands and were furious that they were betrayed so cruelly. Fans in Buffalo would surely vandalize the facilities and stadium, and I imagine some death threats would come about.

Maybe it’s ludicrous to think people would be so distraught by something as arbitrary as sports, but in Buffalo we don’t see it that way. Trying to take away the Bills is a slight to our way of life. The Bills are a part of our culture. They have made us just as much as we have made them. Living in Buffalo without the Bills would be an impossible task. Part of our identity resides at One Bills Drive, and if it were to leave, what would be left behind would be insufficient and incomplete.

The first step to ensuring that would never happen came on September 9, when it was announced Pegula had submitted the winning bid for the Buffalo Bills. While he still had to go through the financial review and owners vote, it seemed like just a matter of time before he assumed control from the Wilson trust.

Fans were elated. I was ecstatic. Our renewed sense of fandom was accompanied by a collective sigh of relief. Trump and Bon Jovi announced their withdrawals and offered congratulations to the Pegulas, but I still haven’t put Bon Jovi’s music back on my phone. I don’t anticipate I will anytime soon either.

After the financial review went swimmingly, and the owners unanimously welcomed the Pegulas to the league, the nightmarish possibility of the Bills moving was replaced with a jubilant realization that they weren’t going anywhere. The press conference on October 10 to make it official was exactly what we had been hoping for, and the pregame ceremony before the matchup against New England the following Sunday was simply incredible. We were all united now, citizens of One Buffalo.

I will conclude this rant with some closing statements (as one usually does in a conclusion). The idea of living in a world where the Buffalo Bills no longer exist terrified me. But it doesn’t anymore. For the foreseeable future, the only place they might be moving to is a new stadium on the waterfront.

The magic will wear off, and the joy the Pegulas brought us by buying the Bills will inevitably fade into frustrated cries for a Super Bowl contender, but for now, Western New Yorkers can bask in this moment, and thank everyone who made the stars align at the right time for this deserving community. 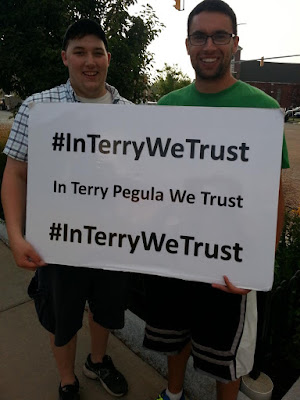