The Kansas City Chiefs cost me a fantasy football game 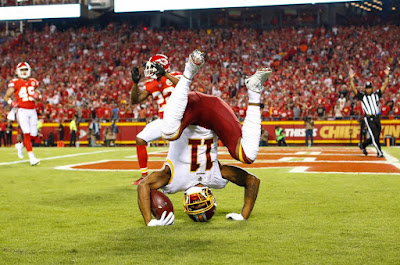 It’s the most ludicrous thing you can say about sports. That an athlete or a team’s inability to perform well is somehow detrimental to the status of your fantasy team. Athletes are meant to play – well or poorly – in the real world, not on your computer screen. Yet, every week, unhappy fantasy owners tweet at these players who let them down, and sometimes get an earful in return. So no, I’m not upset that the Chiefs defense allowed Terrelle Pryor to score his first touchdown of the year and cost me the game, because the Bills actually won and that’s honestly all that matters. I’m just a little bummed that I went into Monday night leading by 11.2 points and wound up losing by 1.8. Whether it’s fantasy or real life, not being able to hold onto a manageable lead never fails to hurt.

Knowing I was going up against Aaron Rodgers meant I had my work cut out for me. Despite throwing for less than 300 yards for the first time all season, he balanced that out with four touchdown passes for 23.1 total points. Just another ho-hum day for probably the best QB in the league right now.

Christian McCaffrey didn’t do much for Carolina and Tarik Cohen had an almost identical stat line for Chicago, but LeGarrette Blount’s beastly day for the Eagles was wasted as he was benched for the game.

T.Y. Hilton and Eric Decker barely even showed up on Sunday, but only one of them was actually a starter for Team 10. Michael Crabtree was an actual no-show because of an injury to his chest and lungs, and Byron’s failure to take that into account wasted at least 6.9 more points from DaVante Parker (or the 10.4 Kelvin Benjamin produced). But the most productive wideout, starter or otherwise was the one who beat the Clowns.

Terrelle Pryor and Washington had a Monday Night date with the Chiefs. He entered the game with 10 catches for 116 yards and zero touchdowns in the first three games of the season. He only caught three passes in Kansas City, but he made them count, as he racked up 70 yards and reeled in his first touchdown in a Washington uniform. His 13 points vaulted Team 10 to 4-0, coincidentally the same record the Chiefs now hold thanks to their win two nights ago. 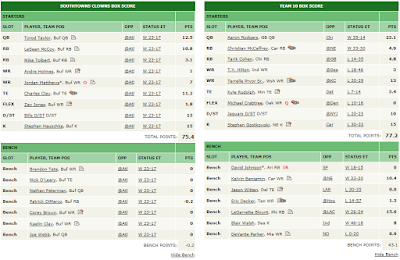 That the Bills defense had to play superbly and the offense had to be spotless if they were to even think about competing with the 3-0 Falcons on Sunday. Not only did they help themselves, but they even got a trio of favorable calls from the officials, not the least of which was Tre'Davious White’s pick-up six on what I honestly believed to be an incomplete pass.

Tyrod Taylor was efficient. Less than 200 yards passing but he threw one touchdown and didn’t commit any egregious turnovers.

LeSean McCoy bounced back to have a better day, more than doubling his total rushing yards from the previous two weeks.

Andre Holmes and Zay Jones were invisible again. Jordan Matthews was nearly irrelevant, save for the touchdown pass he was gifted by Taylor. Kaelin Clay’s only noteworthy play was a penalty that I feared would swing the momentum back to Atlanta. Luckily it did not.

With a tight end (Charles Clay) and a running back (McCoy) leading the team in receiving so far this season, it could be excused that the top three wideouts have a combined 254 yards and three touchdowns thus far. But I won’t excuse it. It’s a sign of deficiency and eventually opposing defenses are going to be able to figure out how to shut down Buffalo’s only two offensive weapons and it’ll be gloom and doom for the Bills and the tears of the Clowns will taste like salty facepaint.

The defense and special teams both had monster showings though, and were the biggest reasons the Falcons lost their perfect record. Stephen Hauschka’s leg has been a bright spot, as he knocked through two field goals from beyond 50 yards less than two minutes apart to put the Bills on top for good.

I left -0.2 points on the bench. That’s pretty swell in my book.

Like I said, I’m disappointed that the Clowns lost, but I’m much happier with the 3-1 record the Bills now hold.

There are still 12 games left, so it’s best to remain cautiously optimistic, but if the offense can catch up to the defense, we’re all set.

The 1-3 Bengals will host the Bills on Sunday. Cincinnati’s only win came this past weekend against the hapless Cleveland Browns, who are well on their way to yet another lost season. Cincinnati was shut out in Week One and only averages 16 points per game, and now they’re tasked with going up against the NFL’s best defense, which has only allowed 54 points to opposing offenses so far.

The 2-2 Clowns will be squaring off against Kevin Salvatierra’s 0-4 Miami Ballers. Matt Ryan will be recovering from Week Four loss on the bye, so it looks like Alex Smith will get the nod to start at QB. The more-reliable Broncos D will also be on the bye, but Seattle shredded the Colts to register 22 points this past week. Still, they’ve been nothing like the Seahawk defenses from the Super Bowl years, sporting a minus-4 two weeks ago in Tennessee.

Matthews is out for the next month or so, so Kaelin Clay will be inserted into the flex position. We'll see how that goes. 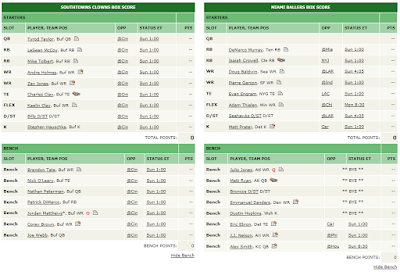 I don’t see any reason to be threatened by this team, and, whether it’s Dolphins, Redhawks, Marlins, or Ballers I tend to live by the saying 'Muck Fiami.' 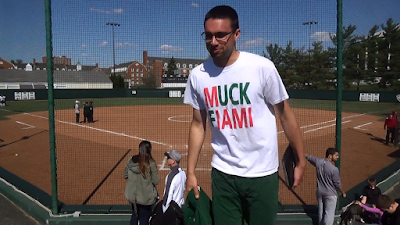 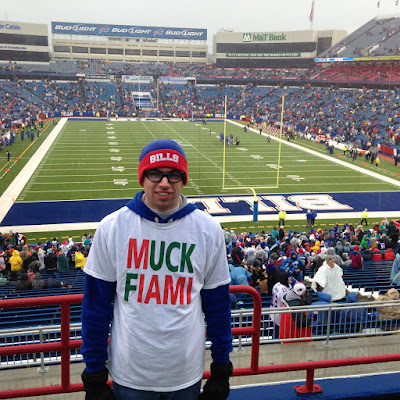