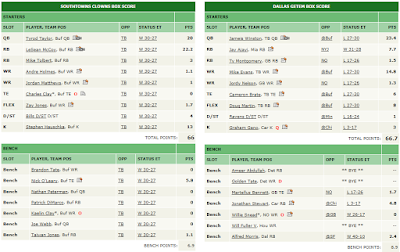 If I had bothered to pay any attention to this game even an hour before kickoff, I could’ve seen that I was going to be having a really good day or a really awful one. If the Bills played well, the Clowns would have too. And while the Bills did squeak out a win, it wasn’t good enough.

Jameis had himself a GAME (minus the two turnovers). His first half numbers were off the charts. He almost had 400 yards passing – and could have if he didn’t have that interception. That being said, the Bucs still lost.

The only time Jay Ajayi is a threat is when he’s playing against Buffalo. Muck ‘em.

Brett Hundley did all the running himself for the Packers so Ty Montgomery was a non-factor.

Doug Martin was nearly invisible. Cameron Brate was wearing a jersey. But Mike Evans scored once. That being said, the Bucs still lost.

Coming out of a bye week, the Clowns had to regroup after being shut out on their weekend off. They got Jordan Matthews back (good) but somehow lost Charles Clay (bad) and nobody told me (worse). So Charles Clay and all zero of his points stayed in the lineup while Nick O’Leary actually played.

One touchdown for Tyrod and his passing numbers (and running) were sweeeeeeet.

Shady didn’t crack the hundo but he did break the plane (twice!) for the first (and second!) time all season. That was sweet too.

Our receiving corps may as well not even dress, because they haven’t contributed at ALL this year. The top three guys combined for six catches and 38 yards. That’s ridiculous. O’Leary wasn’t much more of a factor, but at least he beat the other three guys in total yardage (58).

Stephen Hauschka was the man again, despite his second missed field goal of the year. He put another 13 on himself, cracking double digits for the fourth consecutive game.

The Bills are 4-2 and look like they can compete (somewhat). They’re not consistent and can’t seem to get the offense and defense humming simultaneously, but they’ve got more wins than losses at the moment and that’s neat.

But here’s the rub: If I had bothered to pay any attention to the full injury report on Sunday morning, I could’ve taken out Clay and promoted O’Leary and given myself another win, BUT NOPE. I didn’t think to do such a thing and it cost me DEARLY.

The Buffalo Bills will stay home and take on the 3-4 Raiders. Khalil Mack will be in town, so that’s all the local media is going to say in advance.

The Clowns will be going up against Team 1, featuring the likes Carson Wentz and the Eagles defense (who’ll be home against the winless, hapless, and hopeless 49ers), Melvin Gordon, C.J. Anderson, and A.J. Green. 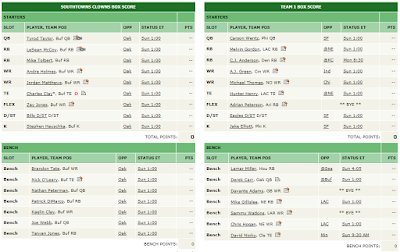 The Clowns will play well but the Eagles will run rampant in Philadelphia, and it’ll be too much for Southtowns to overcome. Team 1 takes it, 91 to 75.