Clowns must regroup, and I rant about the NFL’s awful scheduling

October 30, 2017
After a blowout loss in Week Six, fans of the Clowns hoped the team would find a way to get back in the win column and reverse the misfortune that seemed to be swirling around it. However, it seems those wishes will be put on hold until at least Thursday, as another slim loss sank Southtowns to 2-6 on the season.

Jaden Hayes’ Team 1 managed to top the Clowns count by the time the Bills closed out their win over Oakland (!), so the five-point margin can certainly widen if C.J. Anderson has a big game for the Broncos in Kansas City tonight. But either way, the result is pretty much sealed, unless Anderson runs backwards all night and goes into the red.

Carson Wentz, blah blah blah. Jake Elliott, blah blah blah. Eagles win and have the best record in the league, blah blah blah. I asked her her name, she said blah blah blah. I could’ve seen this one coming a mile away if I was blindfolded and had my head buried in the ground like an ostrich (unlike our pal Biz Markie, apparently). Best team in football against the worst usually means the best will win. And yes, I honestly think San Francisco is worse than Cleveland. Worse, but not necessarily smarter (Deshaun Watson, ladies and gentlemen). And speaking of smart, did you know ostriches don’t actually bury their heads in sand? It’s true!

The Eagles defense and special teams played lights out, and earned Team 1 11 whole points (I hate that this fantasy league gives the defense 10 to start, it’s like giving stickers to first graders who get a 95 percent on their spelling tests.

Melvin Gordon returned to form after a down week. That was neat.

Everyone else was pretty average, and that’s what kills me. One team does so well for a guy that they put him over the top in this matchup. Of course, if I’d won, I’d be complaining about that exact same thing, but whatever. Tom recently died so someone’s got to be Petty. 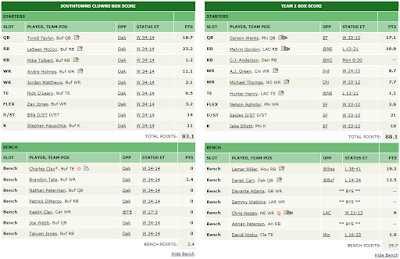 Tyrod Taylor had another efficient game. Despite that one play where he rolled right and nearly got picked, he was pretty masterful at the helm, finding Andre Holmes for a perfectly-timed tuddy in the end zone early.

LeSean McCoy, bingo bango bongo! What a game from Shady. 151 yards from scrimmage and a trip to the end zone to cap it all off. It was the second straight game of mega-output from the guy after the whole team’s running game struggled to get off the ground (no pun intended).

Andre Holmes delivered what I think is statistically the best game by a receiver (not a tight end) all season long. He had three catches, two of which were highlight reel-worthy, and one of which resulted in six points. But how sad is it that the best game of the year for a receiver only resulted in 51 yards?

Jordan Matthews has been so lost this year that even the announcer thought someone else caught one of his biggest catches.

That defense was superb, and though the special teams didn’t get any points for it, Colton Schmidt’s punt at the one was a thing of beauty.

Like I said, the Clowns will have to regroup quickly, as they’ll be back in action on Thursday when they clash with OKC Gohawks for the first time this season. OKC stands at 5-3 after thrashing Team 10 95.3-45.4 this week. The Gohawks boast the likes of Russell Wilson (452 passing yards and four TDs in Week 8), Todd Gurley (22 carries for 106 yards and one TD), and DeAndre Hopkins (eight catches for 224 yards and one TD). 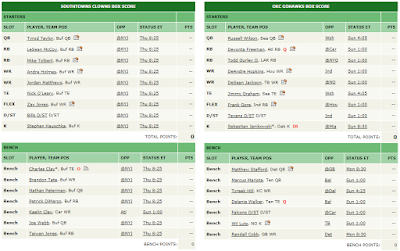 Meanwhile, the Bills also have a short week, as they head out to the Meadowlands to take on the Jets in New Jersey on Thursday night.

Not totally unrelated to how bad the NFL’s scheduling is (Jets on TNF three straight years? Give me a break.), but this will be the second meeting of the season between these two division rivals. Meanwhile, the Patriots and Dolphins don’t come into view until December, when we have to play each of them TWICE in the same month.

I had a discussion yesterday about how the NFL should mandate that divisional opponents play each other one time in the first half of the season, and once more in the second. None of this twice-in-three-weeks nonsense other sports require. It’s absurd that a potential division race or playoff spot will be determined with such weight for no apparent reason.

Gohawks have too much firepower and the Bills can’t scrape together enough muster to win a meaningful divisional game. OKC beats Southtowns, 90-70.

Editor's Note: Matt Birt is a former Buffalo Bills employee and possibly a future one as well.