October 25, 2017
As I announced earlier today, I was forced to buy a new car this weekend after my old one (whose name may or may not have been Bruce) finally needed more repairs than it was worth. The whole experience of buying a car was not as terrible as I expected, and I'm of the opinion that the days of slick, cunning car salesman are nearly extinct, save for the Billy Fuccillos of the world (I'm assuming).

It also conjured up memories of the time I went to a Volkswagen dealership in North Carolina while the softball team and I were on our spring break trip in 2015. I was bored and needed to kill some time, so I decided to make up a story about me becoming a student at UNC in a few months and probably needing a new car. 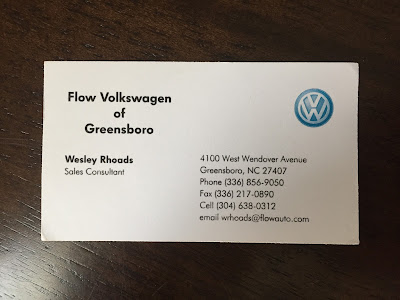 (You can read that recollection here)

Anyway, as a financially-strapped young man who somehow went to bed Saturday poorer than he awoke, I realized that the process of buying my new car wasn't nearly as stressful as pretending to buy that VW Golf was.

I went into that VW dealer with zero car-buying experience. I thought up a fake story and reason for the test drive, because I was fairly certain I would have been politely excused from the premises if I told them the truth.


The guy at the VW dealership asked my birthday, and when I told him he said "You were born on a Wednesday."


The whole time, my primary concern wasn't about me keeping my story straight or dishonoring the Ohio Bobcats tie I was wearing. It was to avoid being sucked into signing a document I knew I had no way of paying off. Was I getting carried away with myself? Perhaps. But either way, I was sweating the whole time. And I only attribute 10 percent of that to the fact it was 80 degrees out on a #WhabammWednesday.

It wasn't even the only car I got to drive on that road trip.

This time around, I had nothing to hide. I reluctantly had to accept that my old Focus would be nothing more than a major source of stress until the day the alternator finally gave out and retired permanently to a nice little condominium in Del Boca Vista. I still have about as much money that I can afford to spend on this car as I would have been able to spend on the Golf (i.e. none) but hey, I'm not Jim Halpert. I can't bike to work because nobody likes the coworker who spends the day stinking of bike sweat, somehow still perspiring five hours after getting to the office.

I have nothing else to say on this matter. It's a damn shame my poor little buddy had to go, but this day was always coming. And if you have any suggestions for names for the new car, you can email them to birtmcdotcom@gmail.com.
buy car dealership Focus Ford music North Carolina Volkswagen