A most bitter defeat

October 09, 2017
It was bound to happen eventually. The Bills would lose a close one they could’ve should’ve won, and it would sink my Clowns in the process. Well folks, yesterday the day finally came. Buffalo frittered away a game to the Bengals, 20-16, and mistakes with their calls – as well as my own – gifted the stupid Miami Ballers their first win of the season.

DeMarco Murray didn’t do anything notable, and was negative in points for a good chunk of the first half.

No player besides Eli Manning finished in double digits.

They combined for 58.8 points. And they won. 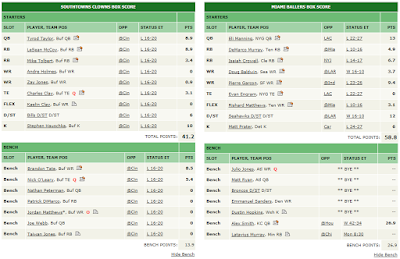 Call it Clownin’ around or Shaqtin' a Fool, it was clear that the pitiful play in the second half was a joke.

Tyrod sealed the win with a Fitzpatrick-like interception.

Shady still doesn’t have a rushing touchdown this year.

Zay Jones’ best catch happened when he was out of bounds.

Charles Clay got hurt on a low tackle that looked pretty cheap to me. I bet he would’ve picked up more than the 5.4 points O’Leary had in his place too, so that was a double bummer.

The defense had three brilliant takeaways (that forced fumble on Green was a thing of beauty) and still gave up too many yards and points to help out.

Stephen Hauschka can have himself a brownie, since he was the only one who really showed up to help.

Blame where blame is due, I should have moved Brandon Tate into the flex after Kaelin Clay’s erroneous penalty last week, but I glossed over that until Tate scored and realized I’d left him on the bench.

Between that mistake and Clay getting hurt, I could have found my way to a win if only Buffalo had done the same.

The Bills will host the middling 2-2 Tampa Bay Buccaneers at home. In their last game, Tampa narrowly lost to the New England Patriots on Thursday Night Football.

The Clowns, meanwhile, will take on Cedric Hoehn’s Team 4, who hold a 3-2 record. Team 4 will be celebrating an impressive Week 5 win at the end of Monday’s Bears-Vikings matchup. Already up 119.3 to 81.3, Chicago running back Jordan Howard still has yet to contribute to the final tally.

At the moment, Team 4 doesn’t have a quarterback to play in this contest. Dak Prescott will be on his bye, while Andrew Luck still doesn’t look to be ready to return from injury.

A four-pack of dangerous running backs will be in the mix, with Leonard Fournette the presumptive No. 1 again this week.

A receiving corps of Antonio Brown and Jarvis Landry will make things tricky, as both receivers had double-digit outings yesterday.

For Southtowns, both Clays may well be out of the lineup, as Charles’ injury could be serious and Kaelin will definitely be benched. O’Leary and Tate will be inserted into their respective positions. 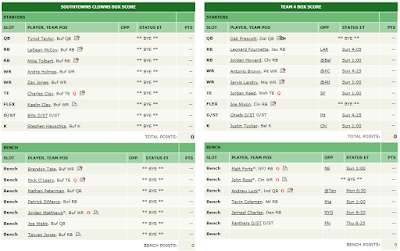 It’s hard to stay upbeat. ESPN is predicting a 130.7 to 41.2 destruction of the Clowns, so I’ll make it 150 to 40 on account of both Prescott and Joe Mixon still being factored into that final. Southtowns will fall to 2-4.