September 22, 2017
Windy garbage days are, quite possibly, the worst kind of days. Cans tip over, trash flies everywhere, and bins end up halfway down the street. I can’t tell you how many times I’d get home and would have to search all over the neighborhood to retrieve my missing recycling bins.

After one particularly blustery Tuesday back in April, I came home to see my neighbors’ garbage cans and recycling bins scattered up and down the street, so I came up with an idea to make sure days like that would never have to happen again.

Instead of attending the town board meeting that month, I decided to write an email to our town supervisor. For some reason I never got a response, so I’m taking the idea off the shelf myself to get it rolling again.

Garbage cans are generally designed to be taller than they are wide. This means that when they are left outside in windy conditions, they are more likely to be blown over, which leads to their contents being spilled. One way to change this problem would be to create a wider base while keeping the height unchanged. This, however, would lead to a terribly bulky and unattractive-looking garbage can. My thought is to keep the shape and volume nearly identical to the current design, with one major change.

Just put it on its side, and make one of the longer faces the new top.

By turning a garbage can on its side, the wider, more stable base you need is already there. So by making one of the longer sides the new opening, you basically have a ‘treasure chest’ shaped trash can that’s much more resistant to strong winds.

Placing a handle on one edge with wheels on the opposite side will ensure the convenience (or lack thereof) of bringing the cans to the curb remains relatively unchanged. Additional hooks or joiners could also be used to attach and anchor the smaller, lighter recycling bins to prevent them from being tipped over and blown away. 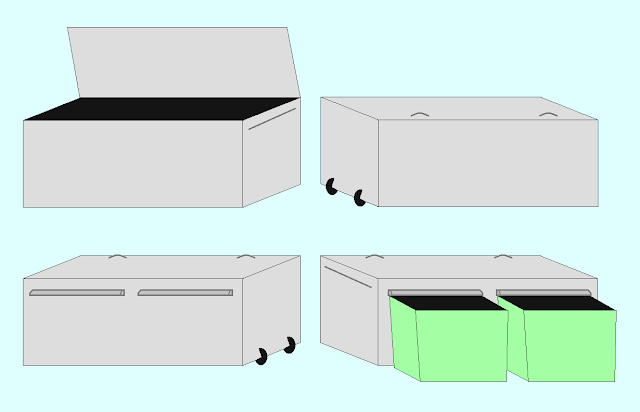