The Bills offense played TERRIBLY. The defense was stellar and the special teams rocked it. But when the Bills had possession, it was awful.

Now, back to fantasy.

Prior to the season, I planned to save my recaps until all of my opponent's players had played, but it seems pretty pointless to wait until Wednesday to vent when I can join the crowd today. Besides, there’s no way possible way for Odell Beckham to record 60 negative fantasy points if he played the Lions all by himself, even if he played on his bad ankle. And even if OBJ doesn’t play tonight and Richers Ravens takes a zero next to his name, there’s no way for the Clowns to recover.

Not much to say here, except credit where credit is due. The guy left 52 points on the bench because everyone (with the exception of Deshaun Watson) still outscored their possible replacement. There’s a chance Brandon Marshall tops Larry Fitzgerald’s 2.1 tonight, but it’s irrelevant. As I predicted on Wednesday, Hunt had another huge game for the Chiefs, tallying two touchdowns and posting 81 yards rushing.

Clownin’ indeed. That was arguably the most frustrating Bills game I’ve ever seen. The offense was inept, and I don’t believe there is a better adjective I can use.

The defense was alone out there yesterday, and they earned me a bonus point (on top of the standard 10) by keeping the Panthers out of the end zone. Normally I’d be thrilled that we held the opponent to a trio of field goals, but when you still can’t outscore them, it just hurts even more.

Tyrod threw for 125 with no turnovers. Could’ve padded the stats and redeemed himself if only he hadn’t overthrown Zay Jones as the clock expired. If that ball is six inches lower, Jones scores and the Bills walk off with a win.

That being said, it’s not all on Tyrod. As I said after last week’s game, it’s hard to fault a guy when the pass is high, but I’ve always been a believer in the whole “if it hits your hands, you catch it” mantra. Ergo, Jones needs to haul that in. And his postgame interview showed that he knew that, which is good.

It was apparent early that the run game would be ineffective, and yet for some reason, the Bills still tried leaning on LeSean McCoy deep into the game. His final totals were nine yards on 12 carries. Nine on 12. Nine. On. 12. If it ain’t broke don’t fix it, but if it is broke, don’t keep trying to force it. Dammit, Gretchen!

Everyone else was invisible, but because of the leadership roles Taylor and McCoy hold, and the unfortunate weight of the play Jones found himself in, I won’t mention anyone else’s names.

Less upsetting than what actually happened is knowing that I’d take an L for the Clowns every day if only the Bills pull it out. If the final drive had ended with a TD and not an incompletion, it wouldn’t have been nearly enough to close the gap, but the tone of this would be much more pleasant.

The Bills will be hosting the Broncos, who demolished the Cowboys definitively yesterday. If the same Bills show up, it’ll be a long day for fans at New Era Field.

The Clowns will be taking on ALB Men of Mayhem. Cam Newton and Kirk Cousins are the team quarterbacks. Le’Veon Bell, Bilal Powell, and Carlos Hyde will be manning the backfield. Demaryius Thomas will be a double threat at wideout because he’ll actually playing against both the Bills and the Clowns. It’s just looking rough. 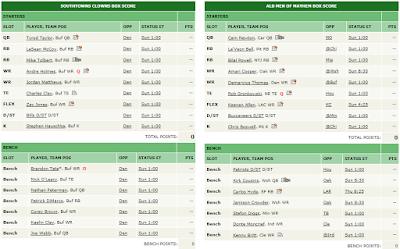