On a scale of Leo Hart to Jim Kelly, how good are Sweet Heat Skittles?

September 21, 2017
A few weeks back, I was cashing out at Walgreens when a small display next to the register caught my eye. It contained black pouches of Skittles labeled “Sweet Heat.” Being a fan of spicy things, sweet stuff, candy, and ill-advised decisions, I gambled and bought a bag.

I opened them a few days later with my girlfriend, who tried one, hated it, tried a different one, hated that too, and then stopped. I, however, actually thought they were kind of interesting. So I closed the bag and brought it to work, where it remained in my desk until today.

It is my intent to describe each of the five flavors of Sweet Heat Skittles for you on a spectrum featuring Buffalo Bills quarterbacks, from Leo Hart (1972: 0-1 all-time with 53 yards) to Jim Kelly (1986-1996: 101-59 all-time with 35,467 yards). Rankings will first be sorted by wins, and then by total passing yardage with the Bills. Please enjoy.

Based on the picture below, the five flavors that are part of the mix are as follows (clockwise, from top): Sizzlin’ Strawberry, Fiery Watermelon, Lemon Spark, Blazin’ Mango, and Flamin’ Orange. Apparently the spice shock from these bad boys was enough to burn off the taste buds required to say the ‘g’ on the end of words. 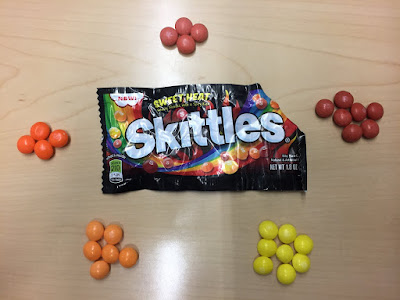 Sizzlin’ Strawberry: Started very sweet, but about halfway through there was definitely some pop that hit the back of my throat like a receiver running a crossing pattern beautifully. The aftertaste was definitely more spicy than sweet, but not in a bad way. 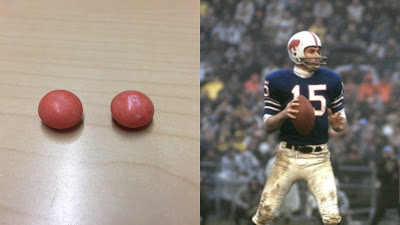 QUARTERBACK: Jack Kemp. Very reliable and could deliver the goods (e.g. the only two league championships in team history) when called upon. The franchise’s first great QB and a very good Skittle to start with.

Fiery Watermelon: Also started very sweet, but the spice didn’t kick in until they were almost gone, like the Bills’ offense last week in Carolina. I almost expected it to not be spicy at all, so when the flavor finally arrived, I was slightly taken aback at its intensity. 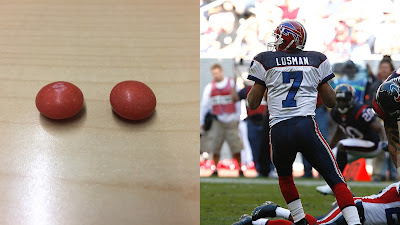 QUARTERBACK: J.P. Losman. Big arm, big kick. Average at best, choke at worst (and I mean choke literally in regards to the Skittles – these ones made me cough).

Lemon Spark: The supposedly-sour sour of the lemon masked the spice almost completely. If it were just a standard lemon Skittle it would be gross. As a Sweet Heat Skittle, it’s a total letdown. It really illustrates why bad cars are called “lemons.” 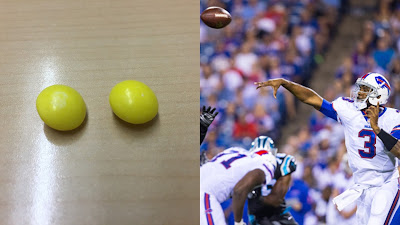 QUARTERBACK: E.J. Manuel. 6-11 as a starter and the first NFL QB to lose games in three separate countries, Manuel was not worth the first round pick the Bills used to take him. This Skittle was just as big of a disappointment, but at least I paid $8,899,998 fewer for the pack than the Bills paid for Manuel. (BONUS: If I was writing about Dolphins’ quarterbacks instead, this QB would be Cleo Lemon for obvious reasons)

Blazin’ Mango: Like the lemon, there was virtually no kick in the mango. Unlike the lemon, it was still super good despite the shortcomings. And that’ll be my segue. 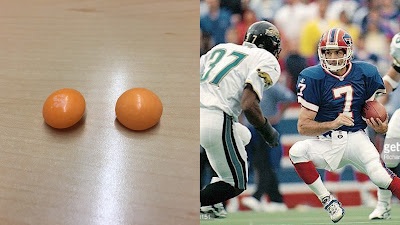 QUARTERBACK: Doug Flutie. Yeah yeah, he was shorter than the “ideal” quarterback, but when the Bills actually got their “ideal” quarterback, he couldn’t win in the playoffs. Meanwhile, Flutie was a workhorse who still had detractors despite a Heisman, a trio of Grey Cup rings, and a slew of wins in Buffalo (both on the field and in the grocery stores). Although this Skittle didn’t do what was expected, it still did something spectacular.

Flamin’ Orange: Didn’t really taste like orange, definitely didn’t taste like spice. Far and away the worst of the lot. 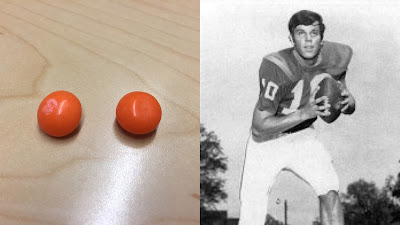 QUARTERBACK: Leo Hart. Until I was looking for a title, I had no idea Leo Hart even existed, let alone played for the Bills. And until I got to this Skittle, I honestly didn’t think I’d actually need to use him as an example. This Skittle was Leo Hart to a T: Masterfully forgettable.

While better than the head-scratchingly awful Chocolate Mix Skittles, the quality of Sweet Heat Skittles was not great. When eaten in unseparated clusters the Skittles tasted like hot, sticky nothing. A substantial waste of $2, especially considering I was standing right above Reese’s for $1.29. 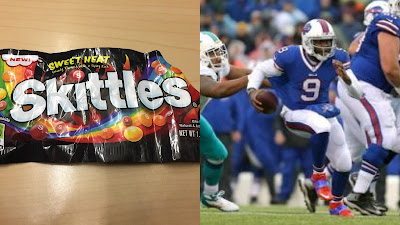 QUARTERBACK: Thad Lewis. This works on more levels than you might realize. Thad was a decent backup for a season, but was never going to be a guy the Bills wanted to rely on – until they had to. When the Bills thinned out at QB, Lewis got his shot and posted a 2-3 record. Likewise, these Skittles would never be anyone’s first choice until things suddenly got desperate. And once things got bad enough that all they had were Sweet Heat Skittles, they would only find two good ones out of five.