This idea has actually been in my drafts folder for a couple weeks now, but I needed to have a recent example to discuss rather than weeks-old recollections.

It all started in July. Me and some of my coworkers decided to take a long lunch and try a few wing places around town over the course of the coming weeks. We would each order a different flavor wing, distribute them amongst ourselves, and rate and compare them. I even made up a Google Sheet for the occasion and named it Band on the Run. Shame on you if you don’t understand why.

Our first place was J. Ryan’s. On the whole, the wings were adequate, but here’s my description of the garlic parm wings:

Where's the sauce? There was none. And the lack of sauce killed the possibility of any flavor. Very dry, with only tones of chicken coming through. May as well have been plain.

I brushed it off as a fluke. It was my first time ever eating wings in Syracuse, and I wanted to give the city the benefit of the doubt. Being Buffalo Easter, I had to believe the relative proximity to the greatest wings in the world would be an asset.

The following week, our destination was Shifty’s. As it turned out, Shifty’s was just a few blocks away from the apartment I had just moved into that weekend. We didn’t get garlic parm wings there, but these were some of the best wings I’d ever eaten, so I knew I’d found a reliable wing source.

About a month later, some of my friends from Buffalo visited, so we got dinner at Kitty Hoynes. Kyle decided to test out their wings, opting for garlic parm, and offered me one. My review:

Kyle said he wanted to try a wing to compare to Buffalo but now I'm convinced Syracuse doesn't know how to put together a decent garlic parm wing.

It was at this point the idea for this article started to form. Was it possible there wasn’t a single restaurant in Syracuse that knew how to make proper garlic parmesan chicken wings?

As it turns out, it was not only possible, but increasingly likely. Last Friday night, I didn’t dance on table tops or take too many shots, but I did finally get around to ordering wings from Wings Over Syracuse.

Wings Over Athens was pretty much the only place to get wings back at Ohio. We had a Buffalo Wild Wings but any Buffalonian who respects himself will know that is NOT the place to get wings. My roommates and I would get Wings Over allllllllll the tiiiiiiime. They had some dynamite boneless wings and waffle fries to die for. We’d ordered garlic parm wings on several occasions, and never wound up disappointed.

The first time I realized Wings Over had a location in Syracuse was not even a week after moving here. I was driving home late at night from Onondaga CC and happened to pass it. It was an incredibly lucky find, but why it took over three months to finally eat from there I can’t explain.

When I went to look at the menu online, I was slightly confused. First, there were actually three Wings Over locations in Syracuse. Second, food had different names. There were no DC-10s or Aircraft Carriers this time. Just standard terminology for their wings (boneless by the pound, bone-in by sixes). They also offered pizza and subs, neither of which the Wings Over in Athens had.

When I arrived to pick up my wings, they had shelves full of snacks and other convenient items, and cases upon cases of beverages. It was vastly different than Wings Over Athens. At that moment, I wondered if they were less like a franchise and more like independently-operating entities that adapt to their location. I shrugged it off, however, and took my 1.5 pounds of boneless wings home with me.

First I tried the lemon pepper zing. It looked like a dry rub until you peeked into the bottom of the container and saw the lemon sauce pooled around the chicken. It was definitely a different style and cut from Athens, but it was still very satisfying.

Next I tried the butter garlic. It was pretty good, but it too had a lot of excess sauce just sitting in a puddle in the box. Sauce moderation on both of these wings would have improved their overall ratings in Band on the Run.

Lastly, I tried the garlic parm. I don’t really know why I doubled up on the garlic-flavored wings, but I did and who cares. They were atrocious. As had been the case with the first two flavors, there was an overload of sauce trying to drown the wings. The flavor was excessively garlicky while the parmesan was virtually non-existant.

Having made this unfortunate discovery, I decided that this was the evidence I needed to determine that there are actually zero places in Syracuse that can make a tasty garlic parmesan wing.

As I prepared my article today, I decided to quickly Google Wings Over Syracuse once again. When I did, I realized the major mistake I had made, and how just how poorly spent my $21 turned out to be last weekend. 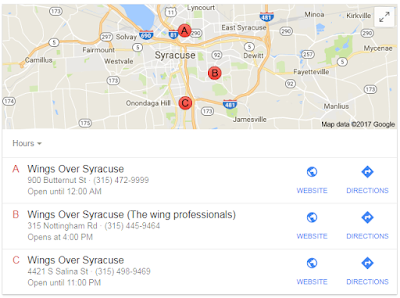 The one I initially had driven past was the third one on the list, on South Salina. Their website was the first one I visited.

Then I looked back at the map and decided the one on Butternut would be the closest one to me. So I went to their website next, and it was basically the same thing.

I noticed they had a locations button in the corner, so I clicked on it, and up popped another map again showing three locations: 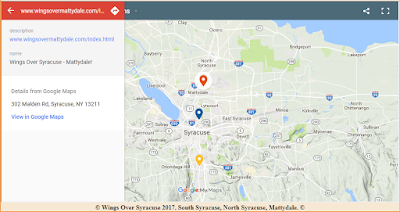 Again, the one on Butternut was the nearest to my apartment, so I didn’t bother looking any further. I found the phone number, called, and ordered.

However, if I had bothered to look closer at the two maps, I would have seen a key difference that could have saved me a lot of disappointment: 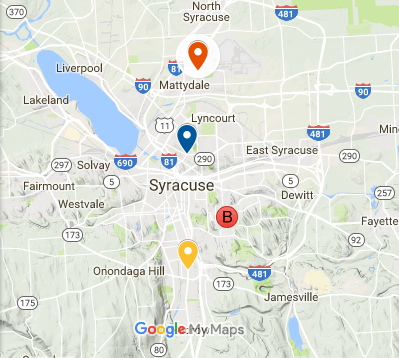 There are four Wings Over restaurants shown between those two maps. The second result on Google was the same company that had the franchise in Athens, and was what I thought I was getting. 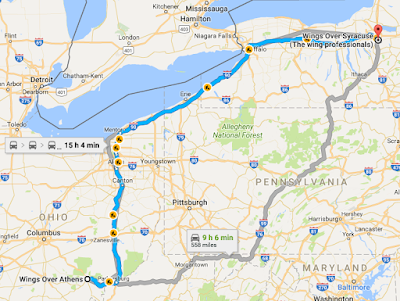 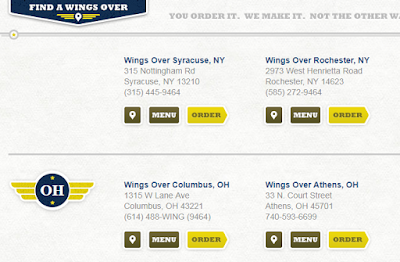 Here’s my advice to you:

Trust your gut, not your stomach.

Truly think about whether you really want to order wings outside of Buffalo.