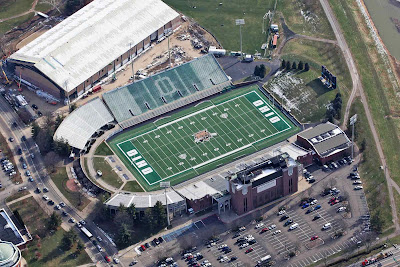 There have been rumblings for a long time that Ohio University would eventually start selling beer at its football games to average patrons and students. Earlier this month, those rumors became reality. After previously selling beer exclusively to donors in designated areas, any fans over 21 will now be able to purchase alcohol inside Peden Stadium.

But there’s a catch.

According to the first reports from The Black Sheep Online, the only beer that will be available will be Natural Ice. It will come in 16-ounce cans, and it will cost fans $12.

Apparently, an informal study was performed at parties around Athens to determine which beer was most ubiquitous and led to the happiest drunk collegians. From the article:

“We found that when there was Natural Ice available, which there normally was, students tended to gravitate toward it and stick around at the party longer,” [university spokesperson Carly] Leatherwood said. “We think we’ll observe this same phenomenon at football games this year.”

Baffled by this news, I immediately texted my friends for their reactions. 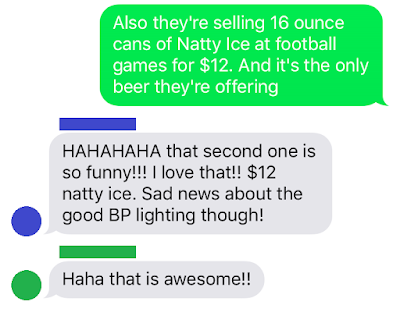 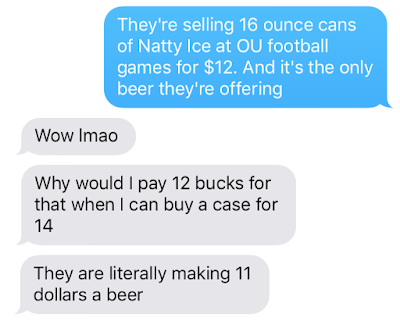 First, I hope the school understands that the reason everyone buys Natty is because it’s cheap, not because they enjoy it. As broke as I was working my way through OU, I still managed to never once buy that swill. It was brutal to drink, but the company markets itself perfectly to the ideal demographic, and you can almost see the execs at Anheuser-Busch making those cartoon money eyes when Sunday morning rolls around during fest season and the streets and lawns are littered in smashed Natty cans.

Second, I would guess that this is just a pilot test. Seeing how beer and students and Tuesday night games in November work will be an interesting experiment. It makes plenty of financial sense to do a trial run with one beer and not commit to something that has potential to backfire (not a lot of potential, but still) before you make a major commitment.

Third, I empathize with the fans who will be attending games and can afford to spend that $12 on beer and they’re getting stuck with Natty. Tough break, but again, I’m hoping they’ll expand their selection next season after reviewing how this year goes.

Perhaps the high price of the beer is meant to invite students to the game for one or two beers but deter them from binging. I don’t know for sure, but it’s a possibility.


Anyway, on Homecoming Weekend, we all know that students and alumni are going to do what we’ve always done: Kegs & Eggs at 5 a.m., then pile in for the game already schmammered, making the $12 beer irrelevant. Why fix something when it isn’t broken?