August 15, 2017
Old Team Tuesday is a weekly feature taking a look at former teams that have gone by the wayside. This week's edition uncovers some history about the most famous basketball team you’ve never heard of.

A basketball team comprised entirely of deaf and mute players with no home venue. That’s who the Buffalo Silents were.

A group of players that spent their winters barnstorming through Ohio and Pennsylvania. That’s who the Buffalo Silents were.

The most unheard of team in Buffalo basketball history (with plenty of great puns to pick from). That’s who the Buffalo Silents were.

The earliest recorded game for the Silents took place on March 11, 1917, when the team traveled to Rochester, New York to play another squad of deaf players. It wasn’t until 1922, though, that the team found its niche.

Tommy Hunt was the big draw when the Silents opened up a midwest road trip in Fremont, Ohio. On December 26, 1922, more than 600 people packed Educational Hall to watch the tri-sport athlete from nearby Clyde lead the visiting squad to a 23-19 win over the Y.M.S. five. During the game, a misunderstanding between an official and Buffalo’s (first name unknown) Murphy provided some comic relief for the quiet crowd when Hunt’s brother, Jimmy, was brought out of the stands to interpret the referee’s message to Murphy.

The team continually won significantly more games than they lost on these outings, though most of the defeats came at the end of the long road trips. Fremont soon became a frequent stop and Y.M.S. a familiar foe as Hunt returned to his home again the following season. On February 13, 1924, the Silents fell in a thrilling 30-28 rematch to the local crew.

As the Silents traveled, they garnered a reputation as a wildly talented team, but also as a very gentlemanly and highly successful one. In 1926, they went 18-4 on the season.

Another strong rivalry developed with the Mount Carmels of Rochester. The Carmelites eked out 31-30 win in their 1922 meeting, which sparked great interest in their future matchups.

As professional basketball continued to develop and move from a regional to national format, the Silents slowly fell out of public consciousness. Without the backing of a large company, they continued to play basketball at a high level, just not against the country’s premier pro teams. In 1938, they played a contest against the Rochester Seagrams (who later became today’s Sacramento Kings). Both teams entered the final period tied at 29, but the Seagrams pulled away to earn a 44-32 decision.

The last moment of glory for the Silents came in 1945, when the squad won the inaugural national deaf club championship over Akron by a 55-53 score. 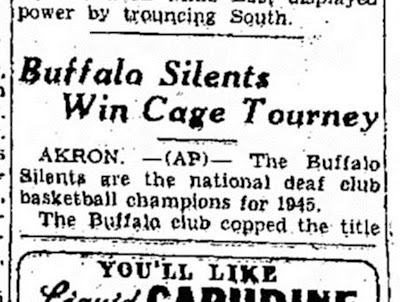 The final known contest that the Silents participated in came on January 28, 1950. They were featured in game one of a doubleheader to benefit the Infantile Paralysis Fund at Rochester’s Kodak Auditorium. They wound up losing the game 58-51 to Camera Works, and the fundraiser brought in $21.83.
Akron barnstorming basketball Buffalo Carmelites deaf Educational Hall Fremont Kings Mount Carmels mute Ohio University Old Team Tuesday Rochester Sacramento Seagrams Silents YMS