August 30, 2017
In a town notorious for losers, Buffalo's most loveable one is retiring. After seven years of fruitless efforts against Chicken Wing, and Atomic Wing, and Bleu Cheese in the WCC Race, Celery’s long-awaited retirement date has finally arrived.

Celery, the quiet one of the bunch, has raced more than 440 times without ever crossing the finish line first. The anthropomorphized gender-neutral vegetable has come close, but even when things are looking good, fate intervenes and keeps it from capturing that tantalizing first W.

People have written that tonight’s race will be the 450th in Celery’s career, but the stats page on the Bisons’ website only accounts for official WCC wins – not losses, re-races, ties, or races sat out. On Star Wars Night, 2011, interference from a band of stormtroopers gave Chicken Wing the win, so the race was nullified and run again following the game. Last summer, Celery sat out at least one race near the end of the season. In April, Celery took to the ice at KeyBank Center only to blow a lead to Chicken Wing because Moose wanted a selfie together.

Just weeks ago, on August 18, Bleu and Atomic tied after the fifth inning, so they raced again before the postgame fireworks. With all these factors to take into account, the combined win totals for Bleu, Wing, and Atomic are not accurate metrics to tally Celery’s numbers.

So here we are, some 400-plus heartbreaks later, and one has to wonder if tonight will be the night. The 10,127 fans in attendance had high hopes on Celery Bobble Head Giveaway Night back in 2013, but we all remember what happened:

Since September, Celery has been on a farewell tour, travelling the globe and being gifted more retirement presents than Derek Jeter. Anticipation is running high for it to go out a winner tonight, but this is the WCC Race, after all, and we know that anything and everything is possible.

When the chips are on the table and it’s crunch time, Celery has a knack for losing in gut-wrenching fashion. It didn’t happen on bobble head night, and pressure has been mounting all season to deliver a win. Now that we’re here, I don’t see Celery being able to overcome the expectations. Instead, I see Carrot making a surprise appearance, clearing the way for Celery yet again, with Chicken Wing somehow making moves and spoiling Celery’s big night.

And that will set up a return in 2018, when it will be just another spectator for the races (can’t really call it the WCC Race afterward, can we?) until Celery feels the Brett Favre itch and no amount of Gold Bond will be able to soothe it. And only after calling it quits will Celery finally taste victory. 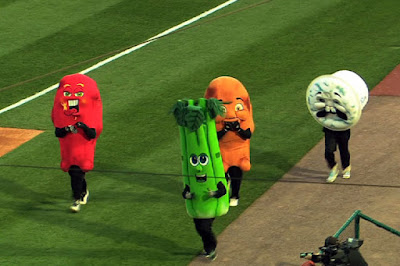 Editor’s Note: Matt Birt is a former Buffalo Bisons employee  and possibly a future one as well.