September 26, 2017
Old Team Tuesday is a weekly feature taking a look at former teams that have gone by the wayside. This week’s edition is about as ultimate as it gets.

The concept of a professional ultimate Frisbee league isn’t as far out as you or Marty McFly might expect. In fact, it’s a reality that found a home in Western New York in 2012.

The American Ultimate Disc League prepared for its first season set with eight teams stretched from the east coast to the Midwest. One of those teams was the Buffalo Hunters, who played in the AUDL’s Eastern Division alongside the Philadelphia Spinners, the Connecticut Constitution, and the Rhode Island Rampage. They took the moniker “Hunters” as a tribute to Hunter Kelly, the son of former Buffalo Bills quarterback Jim Kelly who passed away at the age of eight from Krabbe disease. 10 percent of all the team’s profits for the season were to be donated to Hunter’s Hope, a charitable organization the Kelly family established in Hunter’s name.

The franchise started coming together under the direction of owner and Kenmore native Lee Semrau in the summer of 2011. By September they had hired a coach, Andre Pilette, and found a home venue, at Walter Kunz Stadium on the UB campus. The roster was pieced together after a pair of tryouts in November and December had over 60 area hopefuls compete for 25 roster spots.

On April 14, 2012, the Hunters traveled to Philadelphia to take on the Spinners in their inaugural match. At Franklin Field, home of the prestigious Penn Relays, Buffalo was manhandled as they dropped their first game by a 26-14 score. They didn’t fare much better in their second outing, when they suffered a 26-22 defeat at the hands of the Detroit Mechanix on the road.

Buffalo didn’t play their first home game until May 22, six weeks into the season. By that point they were 0-4 after a one-goal loss to Rhode Island and a 30-15 implosion in Connecticut. On May 7, the team announced that they would be moving their home contests from the University at Buffalo to Orchard Park High School.

The Hunters christened their new home by opening the scoring against Rhode Island. For most of the game, Buffalo kept pace with the Rampage, just as they had in the teams’ previous meeting. At halftime, Rhode Island led 14-12. Unfortunately they couldn’t find a way to pull even in the second half, and the Rampage dropped the Hunters to 0-5 with a 23-21 win.

Buffalo’s next challenge came in the form of the Bluegrass Revolution, an outfit from Lexington, Kentucky. With less than five minutes to play, the Revolution held a narrow 22-21 lead. The two teams went goal-for-goal the rest of the way, and Bluegrass wound up leaving Orchard Park with a 25-24 win to ensure Buffalo remained the sole winless team in the AUDL.

The Constitution brought their 5-1 record to Western New York the following weekend. The weather was blustery throughout the match, as wind gusts exceeded 20 mph at times. Though the Hunters were able to keep the score closer than when they played Connecticut the previous time, the end result was the same. The 17-13 defeat closed out the homestand on a sour note.


Around this time, the AUDL announced their intention to place expansion teams in Boston, New Jersey, and New York, which violated the territorial rights of the teams already in place in Connecticut, Rhode Island, and Philadelphia.

On June 9, the Hunters returned to Franklin Field for a rematch against the Spinners. Philadelphia outgunned and outclassed Buffalo once again, as they opened the game with a 5-0 advantage, and continued to pile it on as the game progressed. The scoreboard read 17-5 at the half, and by the time it was all over, Philadelphia had pummeled the Hunters into submission with a 33-15 drubbing. 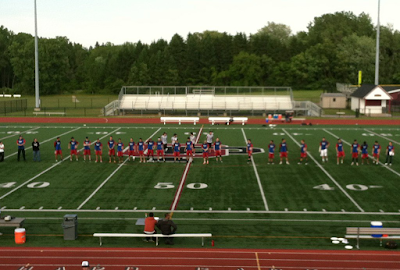 Before their next gameday arrived, the contention between Rhode Island, Connecticut, and league officials had reached a tipping point, and on June 17, the AUDL sued both clubs, presumably for unpaid dues. Their primary issue was that the new teams would eat into a substantial chunk of their revenue (in Connecticut’s case, upwards of 20 percent of their fans were traveling from New York). Meanwhile, the Philadelphia Spinners – who had been able to pay their fees thanks to the best attendance in the league – had been compensated in exchange for their cooperation with the New York and New Jersey franchises.

Back in Buffalo, additional losses to the Indianapolis AlleyCats and Philadelphia meant the Hunters entered Week 12 with an 0-10 mark, almost ensuring the team would be left out of the playoffs, save for a major turnaround with six games to play. Buffalo played their first two-game weekend of the season, as they traveled to New Britain, Connecticut before returning home to host Rhode Island.

Their Saturday night affair with the Constitution was the closest one between the two clubs to that point. After three quarters, Buffalo trailed 16-15. Unfortunately for the Hunters, they were unable to find a way to tie the game, as Connecticut kept them at arm’s length the rest of the way, eventually icing the win by scoring with 1:24 left to go up 21-19.

After a six and a half hour trip back home, Buffalo started slow and surrendered the first goal of the game to the Rampage just minutes in. However, the club battled back and took a 6-3 lead with 1:51 remaining in the first quarter. It was the first time Buffalo led heading into the second all year. They continued the steady play and were up 11-9 when the teams went into the locker room at halftime. In the third, the team blitzed Rhode Island and opened up a 10-goal lead thanks to two quick scores at the tail end of the quarter. When the final horn sounded, Buffalo’s winless streak came to a halt at 11 games, as they became the last team in the AUDL to enter the win column. 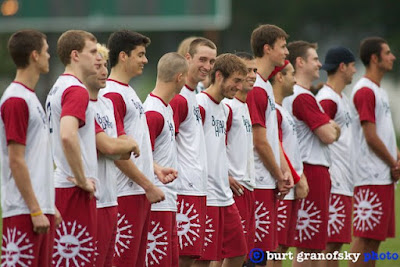 Buffalo’s good fortune continued into the following week. Faced with another set of back-to-back games on July 6 and 7, the Hunters were gifted a 1-0 win thanks to a forfeit by the Columbus Cranes. Unfortunately for the squad, they had already made the trek to Ohio before receiving the news, so they returned home to face the Spinners yet again, who now held a 9-2 record.

The Hunters’ newfound luck didn’t last very long. They suffered their worst loss of the season, a humiliating 35-13 beatdown in what turned out to be their final home game of the season. Following a second consecutive defeat in Rhode Island, their season finale against the Constitution was cancelled after Connecticut team management suspended operations due to the costs incurred during their court battle. The forfeit ended the season on a bittersweet note, as it secured the team’s third victory of the year, but cost the players the chance to wrap up the season properly.

In the postseason, Philadelphia stomped the Rampage and topped the AlleyCats to win the inaugural AUDL Championship.

Exactly two months after their final regular-season game, Semrau and the rest of the team’s management announced that they would be pulling up the stakes in Buffalo to become the Rochester Dragons for the 2013 season. 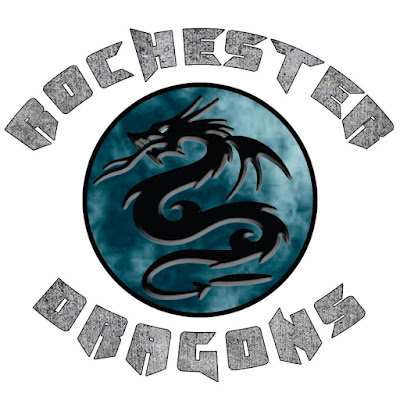 The move to Rochester wasn’t the only one the AUDL would see heading into 2013. While Boston didn’t end up securing their team, New York and New Jersey both got theirs. New clubs also popped up in Toronto, Chicago, Minneapolis, and Madison, Wisconsin. Bluegrass, meanwhile, moved to Cincinnati, and the Spinners joined a new league entirely, although a new ownership group kept the AUDL in the market as the upstart Philadelphia Phoenix. Columbus, Connecticut, and Rhode Island all ceased operations following their debut seasons. The Detroit Mechanix and Indianapolis AlleyCats were the only 2012 clubs to make it to 2013 unchanged.

The Dragons doubled their win total the following season, going 6-10 to finish fourth in the six-team Eastern Division and barely missing out on a playoff berth. Despite the growth, they took a major step backwards in 2014, finishing with a 1-13 record, which wasn’t even bad enough for last place in the league (Detroit and Salt Lake wound up tied for that honor at 0-14). A second straight 1-13 season in 2015 was enough for ownership to pull the plug, as the team folded after four seasons and an 11-49 record in that time.
Andre Pilette AUDL Buffalo disc Dragons frisbee Hunters Lee Semrau Old Team Tuesday Orchard Park High School Rochester ultimate