August 22, 2017
Old Team Tuesday is a weekly feature taking a look at former teams that have gone by the wayside. This week’s edition takes a look at the most successful youth baseball team Buffalo ever produced.

At Cazenovia Park in Buffalo, there are two baseball diamonds and a softball field nestled along Warren Spahn Way. Spahn, the greatest baseball player to ever call Western New York home, represented South Park High School on that dirt. However, for all the accolades Spahn would go on to collect in his 21 seasons as a major league pitcher, his story isn’t the only legend born on that field. In 1929 – some 18 years before the Little League World Series was established – a group of teenage boys that epitomized the term “rag-tag” had a summer to remember, and it all started with a little rejection.

James “Mugsy” Flynn rounded up the rest of the castoffs and implored them to work on their fundamentals in order to become better. Flynn had just been told he wasn’t good enough for the “big team” at American Legion Post 721 in South Buffalo, so he and 13 buddies made the field at Cazenovia Park their home for the summer. With a sponsorship from a nearby men’s clothing store, the boys were given the nickname “Burke brothers” for the season.

Pitcher Bill Joyce was named the team’s captain, and after winning the first six games of the summer, the Burke boys faced the very team they were turned away from. The rejects toppled the elite team at Post 721 by a 6-5 score, and they never looked back.

They rolled through the regular season undefeated, and after bringing in Joe Brown – the head baseball coach  at St. Joe’s high school – to lead them through the postseason, won the Erie County title and shut out a team from Syracuse, 8-0, to become the champions of New York State.

Winning the state crown meant the Burke boys earned the right to play in the regional leg of the American Legion national tournament in New Britain, Connecticut. Fran Russert belted a home run to send them to the eastern sectional tournament at Senators Stadium in Washington D.C., where they won two games, the last one over Libson Falls, Maine.

Still boasting an undefeated record (25-0 to that point), the champs from South Buffalo traveled to Louisville, Kentucky to face the western victors from New Orleans in a best-of-three series to determine the American Legion’s national champion.

Parkway Field was the center of the baseball universe in September, 1929. More than 300,000 boys from all 48 states and Washington D.C. had played in games as early as March for the right to go to Louisville for the Little World’s Series.

After saving Legion baseball with a $50,000 annual pledge in 1928, Commissioner Kenesaw Mountain Landis ended his vacation in New England early to make it down for the second game of the series, and share a meal with boys from both teams. John A. Heydler, the President of the National League, was also on hand, as were a multitude of scouts from professional teams.

Other notable figures in Louisville for the series included Major John L. Griffith (the first commissioner of the Big Ten Conference, and the man who spearheaded the creation of American Legion baseball in 1925), Dan Sowers (National Americanism Director for the Legion, and the man who sealed the partnership with the major leagues), and Thomas Shibe (owner of the Philadelphia Athletics). Additionally, two umpires – Edward McLaughlin of the National League and legionnaire E.T. “Red” Ormsby of the American League – were brought to Louisville to officiate the games.

Boys under the age of 12 were admitted for free, but a capacity crowd featuring people of all ages filled the stands at Parkway. Louisville’s Mayor, William B. Harrison, had the honor of throwing out the ceremonial first pitch at game one. As the innings progressed, throngs of boys crowded near the press area to hear Graham MacNamee call the game for NBC.


With the score tied 4-4 entering the seventh inning, New Orleans pitcher Savvi Carboni was taken off the mound in a bases-loaded situation. Captain Joyce was the first batter to face Joe Beach in relief, and he made the most of the opportunity by breaking the tie with an RBI single. A bases-loaded walk provided the Burke boys with an insurance run, as they took the first game of the series 6-4.

With their winning streak at 26 games, South Buffalo’s Burkes had a chance to run the table and go undefeated on their way to the national championship. But a determined New Orleans squad came ready to play in game two, and wound up providing the spectators with a game for the ages.

Opening the game on offense, New Orleans tagged Buffalo’s Robert Berger for four runs in the top of the first inning. In the bottom of the inning, Buffalo scored five runs of their own off Carboni to take the lead.

However, the advantage was short-lived, as Berger gave up two more runs with two outs in the second, and New Orleans crept back in front. Conrad Wojtkowiak came in to relieve Berger, but gave up four runs of his own before recording the frame’s third out.

The South Buffalo kids came right back at New Orleans in the bottom half of the second, hanging another four runs on Carboni before the defense could record an out. At that point, with the score 10-9 in favor of New Orleans, Carboni was removed in favor of Frank Federico. Federico stifled the Burke boys’ bats for the remainder of the game, and the New Orleans post ended Buffalo’s undefeated season and leveled the series with a hefty 16-9 victory.

Just as in game one, game three’s starting pitchers were once again Joyce and Carboni. Post 721 tallied the game’s first run, and Carboni was once again chased from the game after surrendering six runs in less than three innings. Looking for a repeat of the previous day’s success, Federico came in next, but was far from perfect as he gave up another five runs to make the score 11-2 in favor of Buffalo.

Beach, the New Orleans reliever from game one, was called upon to stop the bleeding. He was able to hold the Burke boys scoreless for the remainder of the game, but the offense sputtered and couldn’t recover from such a deficit. The final score was 11-4, and American Legion Post 721 from South Buffalo was crowned Junior World’s Series champions. 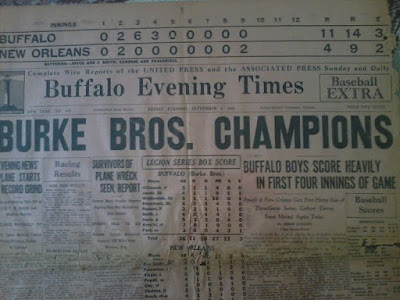 The City of Buffalo threw a parade for their champions upon their return to the Queen City, and the Buffalo Bisons – whose field they had weeded, and then won the state title on – recognized the boys after the first game of a doubleheader against the Toronto Maple Leafs.

Just like the two national champions before them, the boys of Post 721 were rewarded with gold watches and an all-expenses paid trip to see each game of the World Series between the Philadelphia Athletics and the Chicago Cubs.

Shortly after their return from the big-league World Series, the stock market crashed and the world plunged into the Great Depression. In 1933, the major leagues were unable to find the funds for their $50,000 pledge to the championship. With the economy in utter chaos and no end in sight, the Legion feared the Junior Series would falter indefinitely. However, some savvy sponsorships helped keep the tournament afloat, and in 1934, the majors were able to restore their promise to the Legion, and still maintain that partnership to this day.

The Burke boys never played again. Of the sixteen kids on that 1929 team, 15 of them were 16 that summer, which was the uppermost age allowed under the Legion’s rules. But that 26-game win streak, the revenge game, the local, state, and regional championships – it all began that summer in Cazenovia Park, thanks to someone telling those boys they weren’t quite good enough.
American Legion baseball Bill Joyce Bisons Burke Cazenovia Conrad Wojtkowiak Fran Russert Joe Brown Junior Mugsy Flynn Old Team Tuesday Post 721 South Buffalo St. Joe's World Series